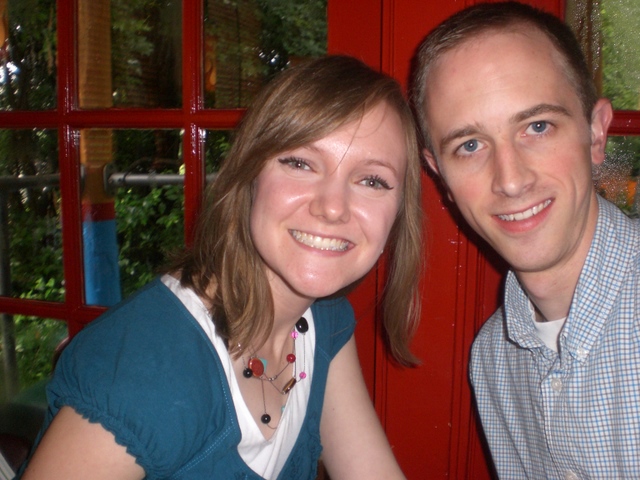 Most people get a three-day weekend for Independence Day. Adam got a FIVE-day weekend. It was AWESOME.

We went to Chuy’s for dinner that Friday. It was oh so tasty. There were a lot of colorful chairs and door frames and artwork. See?

On Saturday night, we went and watched fireworks over “Lake” Austin. We were (pleasantly) surprised to find them on Saturday night at all! They were pretty cool–like our video below shows something that could only be done over a body of water–but they have nothing on Provo. Just saying. Still, it was nice. 🙂

On Sunday we started and continued an Arnesen family tradition.  We made homemade ice cream and watched “A More Perfect Union.”  This time our ice cream was made with mint oreos, a big step up from double-stuf oreos last time. 😉 We really like the movie “A More Perfect Union.” It’s really important to know about the founding of the country and what happened in the constitutional convention.  Its not really associated directly with Independence Day because we’re technically celebrating the signing of the Declaration of Independence, but we figure it’s close enough.  We’ll celebrate again on September 17th!

We rounded off the weekend by visiting cemeteries in the Elgin, Texas area.  We took a wrong turn on “accident” and ended up on some really beautiful roads in part of Bastrop County.  The first cemetery we went to was closed and very small–there were about 6 people there.  The second one (shown below) was larger and overrun by ants.  We cleverly discovered the ants by wearing sandals and then trying to pull back the weeds on a headstone.  We discovered them very quickly and then discovered how fast we could slap our feet.  It was most entertaining.

All in all we had a great 4th of July.