So this week was week two of potty training for Eliza and we had a much better week! She is pretty consistently going in the toilet for #1 and she had a major breakthrough on #2 this week. We have some bigger rewards for her when she does #2 and on Thursday she finally decided that she would get up the guts to try to go. She told Sarah that she needed to go and then just went into the bathroom to “have some privacy” and took care of business! She was tickled pink with herself! She could hardly contain herself when she told me about it when I got home from work. She got to have a reeses and a cool key chain when she did it and she kept them for a day until she had another accident. We’re still trying to get her to consistently have courage to go. She gets up and then just gets scared and kind of freezes up. I suspect that we’ll have another few awesome breakthroughs this week.

After our week last week of sickness this week has been much better on that front. We’ve actually had several nights that everyone has been able to sleep all night! We’re almost done with all of our antibiotics and feeling back to normal.

For several weeks we’ve been planning on going on a daddy daughter date this week. We had a gift certificate to Chick-fil-a and tickets to the Round Rock daddy daughter dance and we were super excited to go to that. Eliza loved getting all ready and dressed up to go. She picked out my blue shirt that she wanted me to wear and got all dressed up in her pretty pink dress. Sarah did her hair like “princess hair” and Eliza loved it! She was just beaming the whole time. We had a fun dinner at Chick-fil-a and then drove to the dance. (She fell asleep on the way over). They had the rec center all decorated fancy and had people there to welcome us and make the girls feel super important.

Eliza just wanted to dance the whole night away. She had a lot of energy for the first hour of the dance and was jumping and dancing and spinning and flying all over the place. We saw some friends from church there and she had some fun dancing with them too. She was so sweet just wanting to dance with me. I had to convince her to go get some refreshments but she really just wanted to dance. She wanted to stay all the way to the end and was super sweet. I had a great time with her and I’m excited to make this a tradition for us.

We also had a family assignment to clean the church on Saturday and we had a good time doing that. Eliza and James worked with us (they refilled the toilet paper and re-dusted things…) and had a good time. 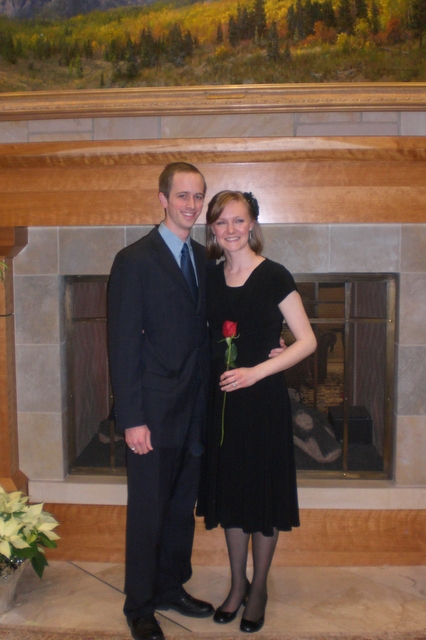 Tonight we went on an awesome date.

Today was not-so fun. I got up really early and drove an hour to Salt Lake City to the Family History Library. One of my classes was meeting there. In addition, I had a project to finish up there that was due at 3pm. It stunk being away from Adam all day (poor guy–he stayed at home without a car and cleaned and did homework), and I ended up staying longer than I had originally planned. Blah. I learned some good things though, so that was good.

Then we had leftovers for dinner. I ate this incredibly-2-jalapeño-spicy soup. Oh man. I’ve been trying to finish it off. I really don’t like throwing out food, however untasty it is. Anyway.

The evening was much better though. First Adam and I went to the adult session of stake conference. Elder Richard G. Hinckley from the Quorum of the Seventy came. The talks were all really good. I was touched by the testimonies and inspired to be a better Sarah.

After stake conference, Adam and I whisked away to the Hinckley Alumni Center for the Y-Ball! The Y-Ball is a free dance for married couples at BYU. Adam got the second-to-last ticket. It was sooooooo exciting. Adam and I haven’t really been to a dance together before…unless you count dancing at someone’s wedding, but that doesn’t really count because it was only part of one song.

Adam was so patient with me. I’m not really a very good dancer, but he’s amazing (to say the least). He taught me all sorts of good steps, and he’s really good at leading. It was a blast. I fell in love with him all over again. 🙂